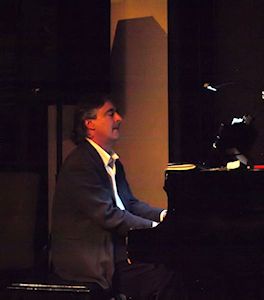 Jeff Colella is one of LA’s busiest jazz pianists. Besides performing in concert as a solo artist and with his trio, he maintains a very active schedule as an accompanist, recording artist, arranger, clinician and teacher.

Jeff’s most recent recording is a collaboration with the veteran bassist Putter Smith that will be released in early 2013. He has two other releases as leader, “Alone Together” and “Letting Go,” both trio recordings and both on Sea Breeze Records.

His music has been recorded by several artists, most recently by the noted saxophonist Bob Sheppard, who recorded two of Jeff’s compositions on his latest CD “Close Your Eyes”, released on BFM Records. Jeff’s work as arranger/pianist can be heard on the Summit Records CD “Lost In The Stars” by vocalist Deborah Shulman and trombonist Larry Zalkind, released in April 2012.

In addition to his professional schedule, Jeff is currently on the faculty at the Musicians Institute in Hollywood.